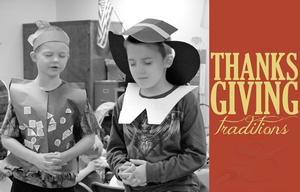 Tomorrow, Sunnyside Christian School becomes a bustling, busy, living tradition. It’s the day before Thanksgiving, which means school gets out at noon. But before that, several traditions will take place.

First, family and friends will fill the folding chairs in the gym in anticipation of Thanksgiving Chapel. Soon after, the students will begin to file in, first stopping at the row of tables flanking the east wall. As the students file through, the tables fill up with non-perishable items which will be donated to the Union Gospel Mission in Yakima. Flour, canned beans, sugar, canned corn, tomato soup.

After chapel, it time for the third grade tradition. For weeks, they’ve been working on decorating their classroom with Native American art including a paper mache canoe, a paper teepee, sand art, and much more. Folding chairs replace the desks in their classroom. It’s time for them to tell the story of the pilgrims coming to America. They put on their hats and feathers. Some are clad in brown leather and moccasins, while other have on black pants and white shirts. The baby dolls are carried in laundry baskets, and Squanto makes everyone laugh. After the performance, Mrs. Martinez plays the piano while they sing a Thanksgiving hymn.

Meanwhile, in another room, parents are decorating a long table with enough plates, cups and snacks for every first and second grader. It’s time for The Feast! Each second grade pilgrim matches up with a first grade Native American, and together they share a yummy snack. It’s their version of the Thanksgiving meal, with popcorn balls and beef jerky.

Even though these events happen each year, it never gets old. It’s something that connects us to this community of Sunnyside Christian School. Can it be true that 25 years ago, I put on my feathers and played my part in that third grade play? I remember being up to my elbows in paper mache making that canoe.

I’m thankful for traditions. I’m thankful for the teachers that continue to work hard to educate our children about Thanksgiving and the way of life of pilgrims and Native Americans. And I’m thankful that the play ends in a God-glorifying hymn and that The Feast begins with a shyly spoken prayer by a brave 2nd grader. To God be the glory!